How The Internationelles Smashed a Guinness World Record…

“We wanted to do something that shows what women are capable of and to fight for equality within our sport!”

For the Internationelles, it was mission accomplished when earlier this year, Tour de France organisers announced that a women’s Tour will finally take place in 2022. After years of tireless campaigning for gender equality in cycling, this was a momentous achievement for the Internationelles, and a big step forward for the sport. And while they would be forgiven for resting on their laurels and basking in the glory of their progress, this is simply not the Internationelles way! Instead, the UK based team decided to set a Guinness World Record. Team captain Louise Gibson shares how it all went down... 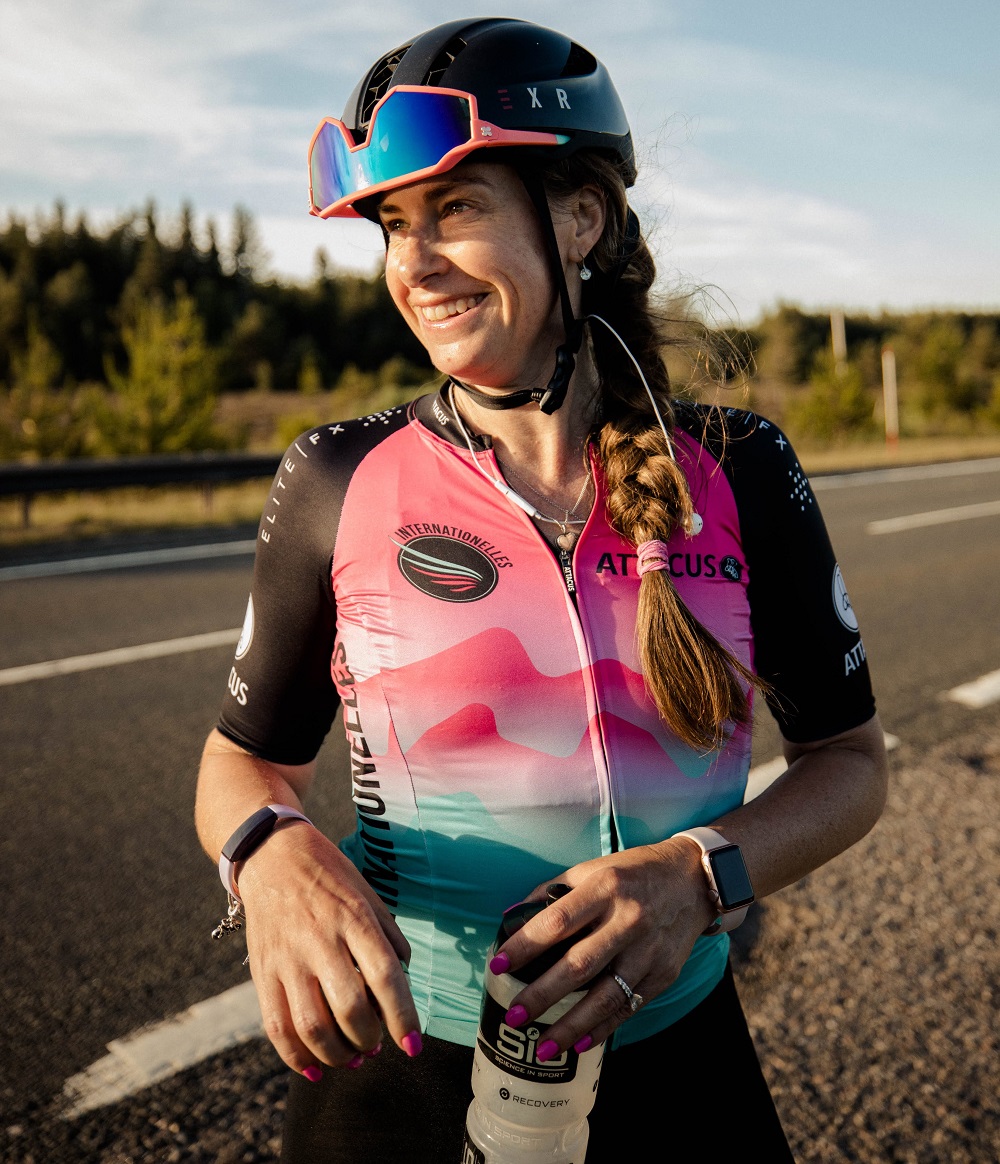 "I am delighted, proud and in awe of my team." Internationelles captain Louise Gibson shares how they set a Guinness World Record...Photo: Francis Cade

"The original plan was to go to France and ride each stage of the Tour one day ahead of the professional men, but Covid scuppered this plan once again. As a plan B, we came up with something that might excite even non-cyclists in the way the Tour does, a point to point record attempt from Land's End to John O'Groats! In short, doing something exciting and inspiring like this allows us to open up a conversation about what women are capable of and to fight for equality within our sport."

"There hasn't been an official record ever set for a non-stop 4 person relay cycling from Land's End to John O'Groats so we thought, why not? The Guinness Book of Records set us a guide time of 50 hours so our original aim was to come in ahead of that at 48 hours. We split the total distance as equally as possible into sections of 1-2 hour stints and hired a tour bus to rest in after each relay leg to allow us to ride continually without a break. We actually ended up riding the full 1349km distance in 46 hours and 3 minutes." 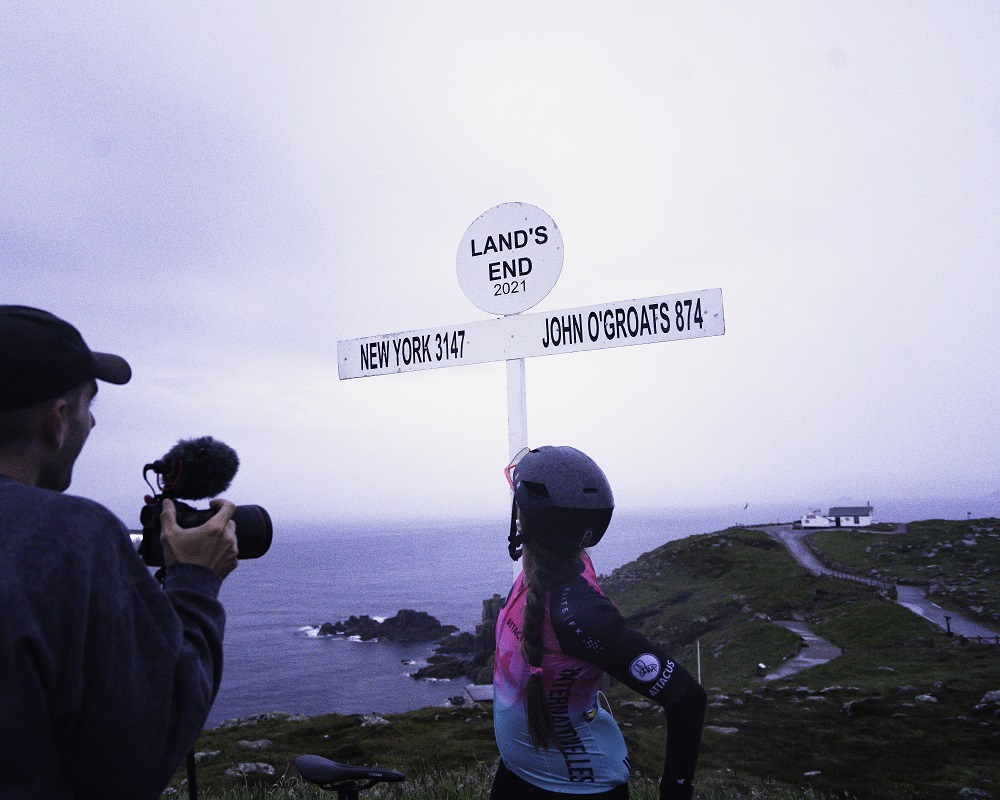 "Doing something exciting and inspiring allows us to open up a conversation about what women are capable of and to fight for equality within our sport."Photo: George Galbraith

How it all went down…

"For the 4 of us to ride in a continuous relay, we all got very little sleep, but everyone gave their absolute all. We were supported by 7 incredible crew members and we couldn't have done it without them! I am delighted, proud and in awe of my team and we pushed from start to finish to get the job done. One of the things I was the most apprehensive about was motorists and their reaction, we were riding on some pretty major roads. Actually, it was no issue at all - signage explaining the record attempt on the follow vehicle gained us a whole lot of support and understanding, it was really humbling." 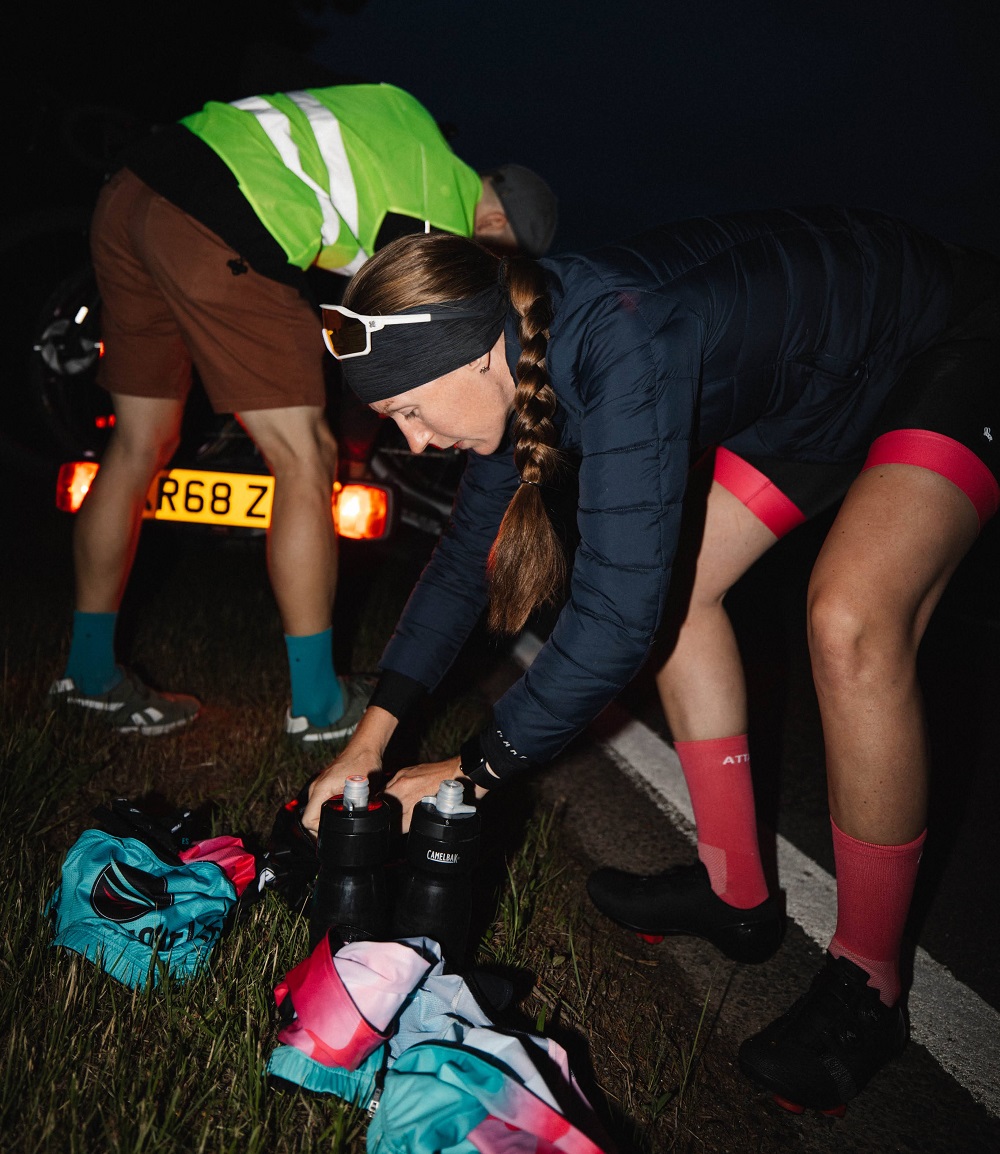 "For the 4 of us to ride in a continuous relay, we all got very little sleep, but everyone gave their absolute all."Photo: Francis Cade

"The weather was the primary cause of any low moments. Riding through the driving rain was particularly challenging and at times, we were battling headwinds so strong you had to push hard to get anywhere and pedal pretty hard to get downhill..." 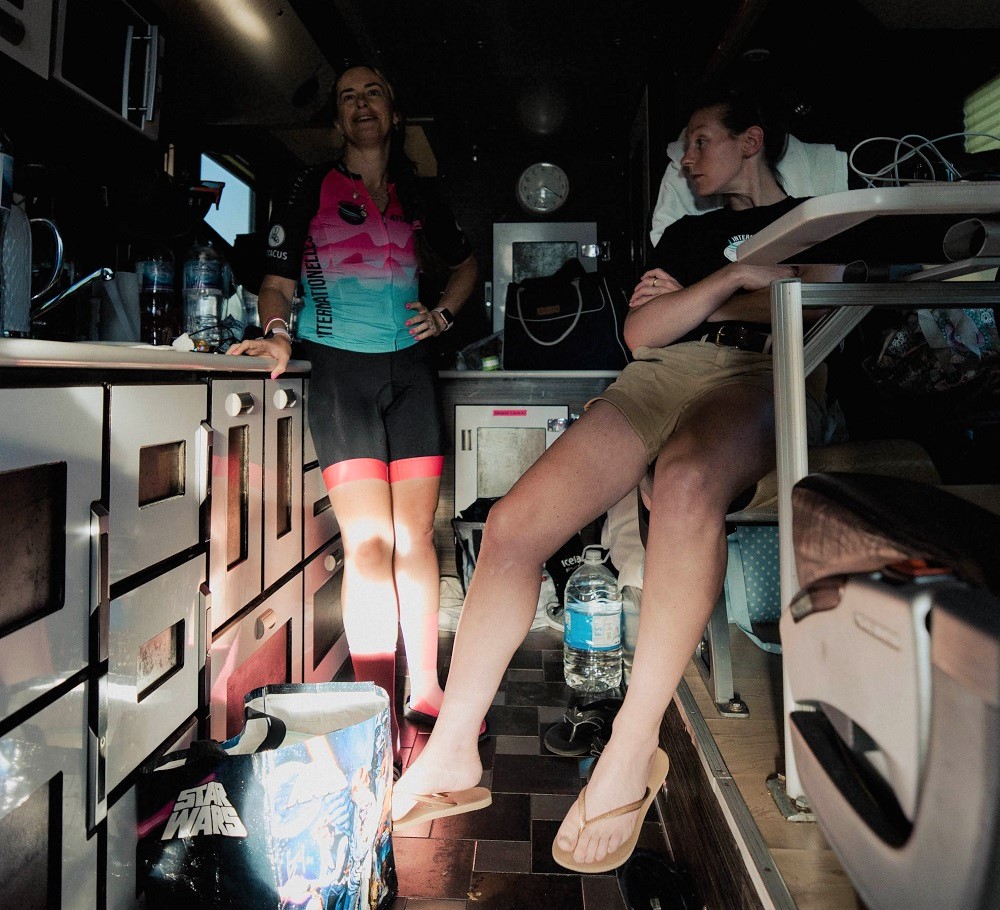 "The tour bus acted as our moving base where we rested and re-fuelled between stints."Photo: Francis Cade

"We battled through rain and wind of biblical proportions, dodged traffic through some major cities, and argued with our sore aching bodies! But all of the suffering made the high point of coming into John O'Groats so much sweeter and the pride we felt, immense." 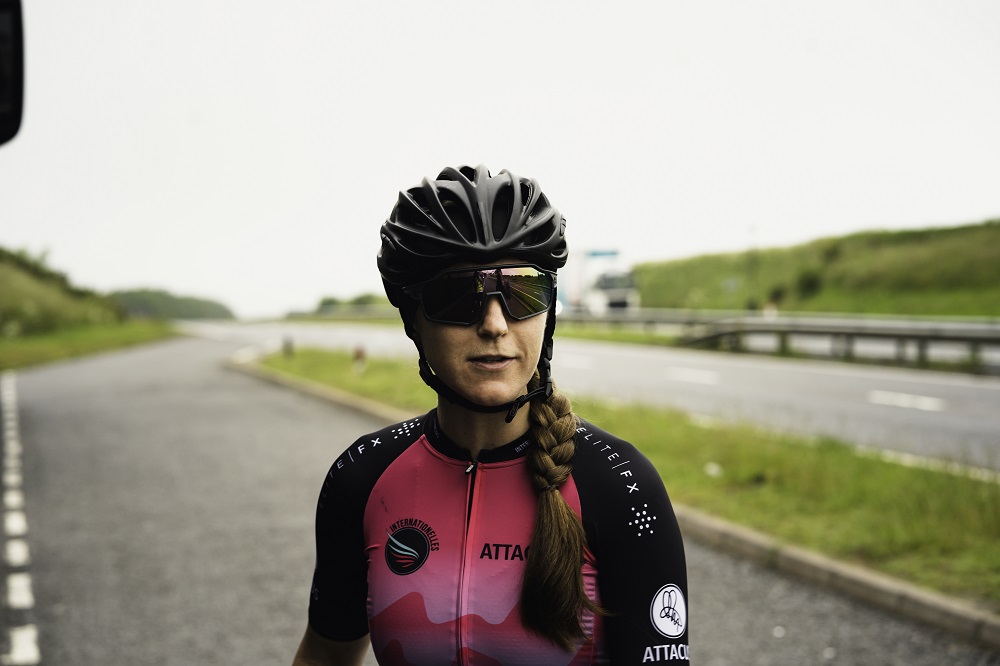 "All of the suffering made the high point of coming into John O'Groats, so much sweeter!"Photo: George Galbraith

a women’s Tour is already announced for next year, what are your thoughts on that?

"It's time women had the same opportunities as men, across the board. We’re living proof that we can influence within our sport and use our platform to inspire and educate. We’ve achieved the first step and we're really happy a proper women's Tour de France is starting next year. We will support the race in the hope it survives and grows! The next step for us is to capture and maintain this momentum and continue to campaign for equality in prize money, pay and coverage."

"We’re living proof that we can influence within our sport and use our platform to inspire and educate."Photo: George Galbraith

What are your Predictions for the future of women's cycling?

"The future is good, races are happening and coverage is getting better. I urge all women to get on a bike and encourage others to do the same! Watch both women's and men's racing, follow the cyclists on social media and promote what they are doing. Something that blew me away from the start is how confident our partners were that we would get it done. Then I think of the incredible people that make up the team and wonder how I could have ever doubted us - what a dream team!"

What is next for the Internationelles?

"We start riding back down from John O'Groats to Land's End on Thursday the 1st of July and we are hoping people will join us along the way. We also have some virtual rides coming up on Zwift as part of the Fast Is Fun series. Next year we will find a way to support the promised and long-awaited women's Tour de France!" 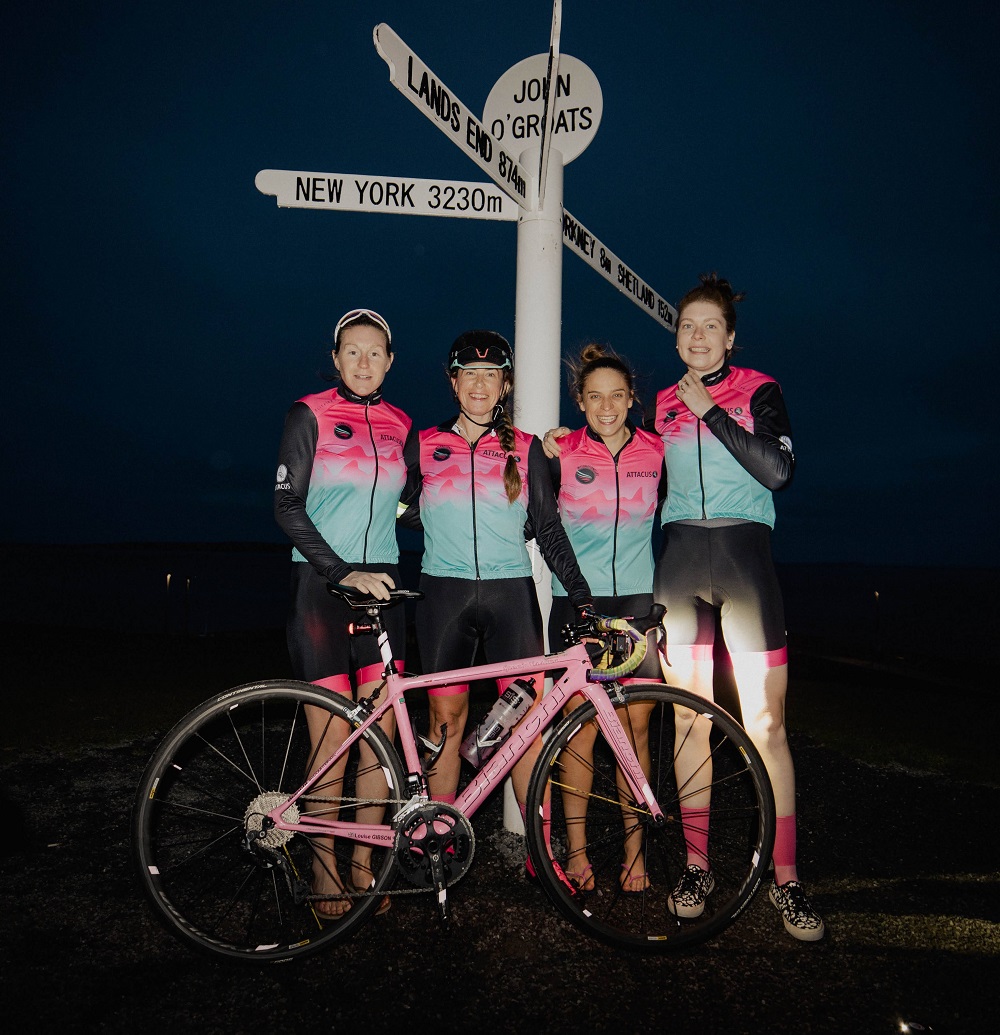 "Then I think of the incredible people that make up the team and wonder how I could have ever doubted us - what a dream team!"Photo: Francis Cade

While the eyes of the cycling world are locked on the biggest race of the year, the Internationelles have continued to do what they do best - turn heads and maintain the dialogue of change. They have proven that actions speak louder than words and we have no doubt that their challenge-based campaigns to level the playing field in cycling will continue for years to come. We’re stoked to work alongside them and to see what they do next!

Check out the latest vlog from SunGod Ambassador Francis Cade who captured the record attempt from start to finish: